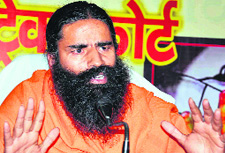 Jalandhar, Punjab: Following protests by various Sikh organisations, the police today registered an FIR against yoga guru Ramdev for allegedly hurting religious sentiments. A case under Section 295-A (deliberate and malicious acts intended to outrage religious feelings of any class by insulting its religion or religious beliefs) of the IPC was registered against him at police station division number-4, Jalandhar. The complaint was lodged by Harpreet Singh, a member of the Sikh Talmel Committee. Sikh bodies held protests at Company Bagh Chowk here in the afternoon, following which the case was registered.

The yoga guru’s photographs seated on a high chair with the picture of Guru Gobind Singh lying near his feet during his programme at Talwandi Sabo had gone viral on the social media, after which the protests had started.

Last week too, the yoga guru had remained in the eye of the storm with Dalit leaders protesting his comment against Rahul Gandhi. Ramdev had alleged that that the Congress vice-president visited Dalit homes for his “honeymoon”. Even then, the yoga guru had to apologise. He had claimed he was misinterpreted.

SGPC too hits out

The SGPC has also taken a serious note of Ramdev reportedly keeping Guru Gobind Singh’s photograph near his feet while sitting on the dais during an event. In a statement released here, SGPC chief Avtar Singh Makkar termed the incident as unfortunate.

“Though Baba Ramdev is famous for yoga, he has been into one controversy or the other. A person who doesn’t know that the photograph of gurus should not be kept below his own sitting place can’t be expected to preach anything to other people,” he said. He said there was widespread resentment among the Sikh community over his move and he should tender an apology without any delay.

Yoga guru’s Ramdev’s photographs seated on a high chair with the picture of Guru Gobind Singh lying near his feet during his programme at Talwandi Sabo had gone viral on the social media, following which the protests began 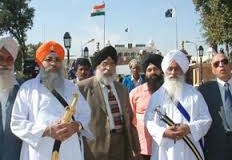 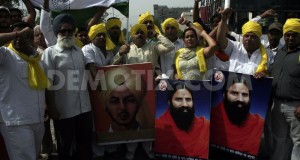