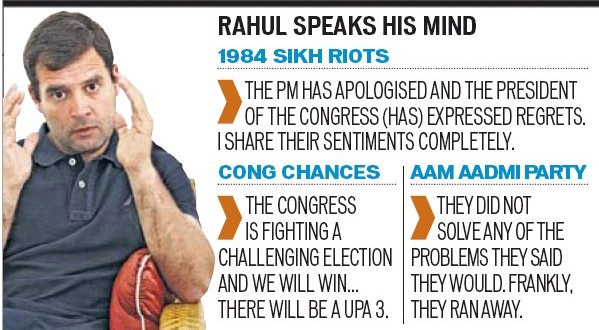 Comments Off on Rahul rakes up genocide, says clean chit to Modi ‘far too premature’ 457 Views

New Delhi: In one of his sharpest attacks on Narendra Modi, Congress leader Rahul Gandhi said a “clean chit” to the BJP’s prime ministerial candidate in the 2002 Gujarat genocide was “far too premature”.

Tur ning the focus of his campaign once again toward a thorny part of the BJP leader’s career, Rahul said there should be “legal accountability” for a “clear and inexcusable failure of governance under him”.

In an elaborate interview to the Press Trust of India, Rahul also said he did not agree with his party colleague P Chidambaram’s view that the UPA was an “underdog” in the Lok Sabha elections, adding, “There will be a UPA 3.”

Taking questions on a range of topics, the Congress vicepresident said the Aam Aadmi Party wasn’t a “factor” in the national election and also seemed to change his stance on the 1984 Sikh genocide. While he had during a television interview in January stopped short of personally apologizing for those genocide, he told PTI, “The Prime Minister (Manmohan Singh) has apologised and the president of the Congress party (has) expressed regrets. I share their sentiments completely.”

Rahul said the “clean chit” to Modi by a special investigation team (SIT) had been “seriously questioned” by a number of “credible experts”. “The acceptance of the flawed SIT report by the lowest court has not yet been subjected to judicial scrutiny by higher courts.” He continued, “The specific allegation and evidence pointing to Mr Modi’s responsibility in the 2002 genocide are yet to be adequately probed. Any talk of his having been given a clean chit may be politically expedient, but is far too premature. There are many unanswered questions. There is a lot more the country needs to know.”

>>‘ Rahul’s offensive came a day after the BJP announced Modi would contest from Varanasi. Critics accuse the Gujarat chief minister of abetting or not doing enough to prevent the religious clashes that killed more than 1,000 people, three-quarters of them Muslim. To counter this, Modi and the BJP cite a court-led probe that found no evidence that he was involved.

On the Congress’ poll prospects, Rahul admitted there was a “certain amount of anti-incumbency against us”, but asserted, “The Congress is fighting a challenging election and we will win the election.”

Asked if he was ready to sit in the Opposition, he said he was “here for good”, regardless of the elections. “I entered politics because of the infinite love and affection I have shared with this nation. There is no possible outcome of this, or any future election, that can make any difference to these sentiments.”

On Modi often calling him “shehazada” (prince), Rahul said “people” would judge a politician’s “choice of words”. Touting the UPA’s policies as “transformatory”, he pushed the land acquisition bill, lokpal bill, a law for street vendors, RTI, MNREGA and the food security law.