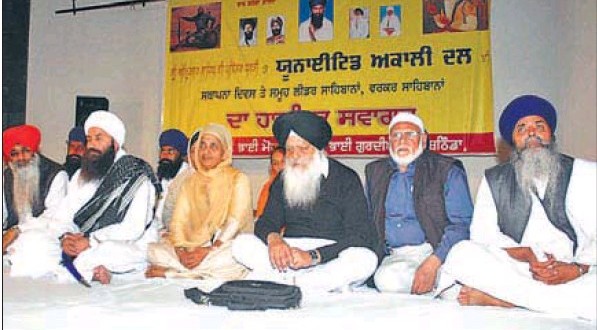 Amritsar, Punjab: Radical elements in the Sikh Panth, opposed to the ruling Shiromani Akali Dal (SAD), have joined hands to form yet another Akali party — the United Akali Dal (UAD).

The formal declaration of the formation of the UAD was made here on Saturday following a convention of the United Sikh Movement, a socio-religious group that had been in existence for the past two years. The group was formed by Bhai Mokhan Singh, a member of the Mehtabased seminary, the Damdami Taksal, with a view to fighting drug addiction and preventing Sikh youth from cutting their hair short.

The convention commenced with the announcement that henceforth the United Sikh Movement would cease to exist. Its place will now be taken by the UAD, a secular political party belonging to all Punjabis.

While affixing the word ‘United’ to the new party, the main aim of the leadership was to get all Akali leaders opposed to the Badal faction, on a single platform. However, the leaders of the new party failed to put up a united political front of Sikh leaders that would have some strength to take on chief minister Parkash Singh Badal and his Akali party.

This desire was expressed by Bhai Mokham Singh when he told the media, “We had invited all (anti-Badal Akalis) to the convention. But for reasons best known to them, they chose to stay away.”

Despite the presence of radical elements in the convention, including former militants like Wassan Singh Zaffarwal, the UAD leadership declared that it would have nothing to do with the demand for Khalistan.

On the contrary, in its very first resolution passed at the convention, it demanded “an autonomous region for the Sikhs, where the community could experience freedom” but within India. The demand was akin to those enshrined in the numerous ‘Anandpur Sahib Resolutions’ which were passed in the seventies by the SAD.

Calling for a federal structure, the resolution demanded devolution of powers from the union to the states. While the union government should have full control over matters like defence, railways, foreign affairs and finance, the other departments, including agriculture and food, should be handed over to states, it said.

Zaffarwal, one of the five militants to have signed the declaration for Khalistan at the Akal Takht in 1996, when questioned, said, “Times have changed, now this demand has no relevance.”

Like the ruling SAD, the new party demanded that Chandigarh and all Punjabi-speaking areas of adjoining states be handed over to Punjab. The demand also included giving Punjab its rightful share in the river waters.

SIKHS ASKED TO BE ALERT ON ‘RSS DESIGNS’

The new party, through another resolution, slammed the ‘family rule’ by the Badal clan and accused him and his relatives of amassing wealth through corrupt means. The resolution also claimed that under the Badals, traditional Akali leaders, many of whom had gone to jail during the dharam yudh morcha in the eighties, had been eased out and corrupt leaders had now taken centre stage. The resolution also held the state government responsible for drug smuggling into the state.

The resolution also stated that the Congress was no better than the SAD (Badal) and held the party responsible for Operation Bluestar and the Sikh genocide of 1984. It demanded that the Modi government bring a resolution in Parliament seeking forgiveness for the two incidents.

Another resolution asked the Sikhs that they remain alert on the designs of the RSS, which is trying to spread its wings in Punjab.

For the smooth running of the party, a 25-member ad hoc coordination committee was formed with Bhai Mokham Singh as its convener, Gurdeep Singh Bathinda as secretary and Bhagwan Singh as chief adviser.

The convention also demanded that all cases registered by the government against Daduwal be withdrawn. The first meeting of the party will be held on January 1, 2015 at Chandigarh in which members of the working committee of the party along with district-level office-bearers will be announced.