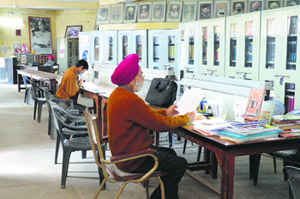 Ludhiana, Punjab: It is said that the survival and growth of a language directly depends on the literature produced in that language. However, the Internet has hindered the growth of Punjabi even as literature in the language is being churned out. Today’s generation is hooked to Internet and seldom spares time for reading books.

Language experts are of the view that the Punjabi literature has come to a point of stagnation. Books are still written in Punjabi but less number of readers is what the exponents of the language worry about.

Karamjit Grewal, a national award winner and a teacher at Government High School, Kheri Chameri, opined that though hundreds of books were being published each year, its readers were limited.

Grewal, who has many children books to his credit, said books were popular in rural areas where children have limited access to the Internet but sadly, they neither have libraries nor easy access to books.

About children literature, he said writers need to move forward. “Today’s generation has come out of the world of fairies and demons. They want science fiction, to which they could relate easily,” he said.

Gurdev Singh, a retired Punjabi professor, said most of the literature being produced today lacked thought process. “Even the poetry that is written today has no depth,” he said.

Subhash, who runs a book store at Chaura Bazaar, said, “It is a fast-paced world and today’s generation wants things instantly. They get the information they need at a click of mouse. Now, even Punjabi books are being digitized. The number of buyers visiting us has decreased considerably. The demand for Punjabi literature books is limited to those students who are carrying out research works.”