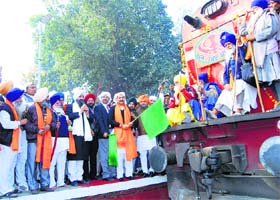 Dhuri, Punjab:  With 270 pilgrims on board, the Panj Takht Darshan train was flagged of here today by the Sungrur MP, Vijay Inder Singla, after ‘ardas’ by Bhai Bahadur Singh Khalsa. The MP had requested Railway Minister Mallikarjun Kharge to start the train during the latter’s visit here on November 17, 2013. Singla said he was happy he had succeeded in connecting the five Takhts in just three months.

The Director (Finance), Indian Railway Catering and Tourism Corporation (IRCTC), New Delhi, MP Mall, said the next journey could be March 21 or April 18, depending on the pilgrims’ response.

The 504-seat train has seven coaches for pilgrims, two for luggage, and a pantry car.The train will return to the Dhuri railway station on February 25. The ticket fare, including food and bus facility, is Rs 8,250 per person. The train will cover about 5,250 km to and fro.

Gurdeep Singh, a businessman from Sultanpur Lodhi, said owing to the MP’s efforts, his and his wife’s dream to visit the five Takhts had come true. He suggested that the train should be air-conditioned. School lecturer Om Parkash from Sangrur was among those who boarded the train today.