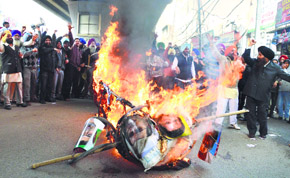 Comments Off on Protest outside Congress Bhawan 453 Views

The protest was held under the presidentship of Surjit Singh and president of women wing Gurdeep Kaur.

The protester urged the government to constitute a SIT under the supervision of a judge of the Supreme Court.

Leaders of the society said an FIR should be registered against the accused who were involved in the 1984 genocide.

The protesting members and office-bearers said if the government fails to constitute SIT within a week, then the riot affected family will sit on fast unto death outside the residence of Rahul Gandhi.

The protesters also removed posters of Congress leaders from the Congress Bhawan.

The commuters were also put to inconvenience as they had to take longer routes, as the traffic was also blocked outside the Congress Bhawan on the occasion.