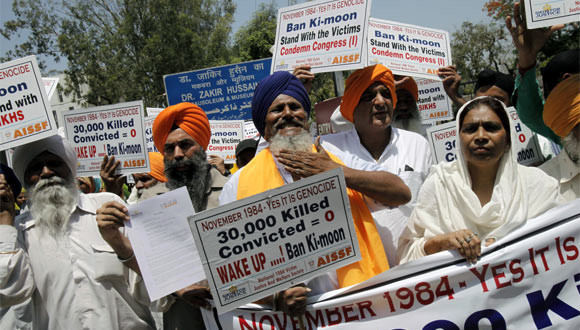 New Delhi: A delegation led by SAD leaders here today met President Pranab Mukherjee and demanded setting up of a special investigation team (SIT) to investigate the killings during the 1984 Sikh genocide.

The delegation demanded that the probe should be monitored by a sitting Judge of the Supreme Court. The leaders said documents related to the UK “role” in the Operation Bluestar should also be handed over to the Delhi Sikh Gurdwara Management Committee (DSGMC). They also sought building of Banda Singh Bahadur memorial in Delhi.

A memorandum submitted to the President said, “The mass killings of Sikhs during the riots have not been inquired properly and murderers are roaming free.”

“The Sikhs all over the globe have been observing 30 years of the Operation Bluestar and also of the 1984 Sikh genocide to mourn their loved ones. The latest revelation of the Union Government seeking UK help has further caused hurt to the community,” they said.

The leaders also demanded the setting up of a “Minority University for Sikhs”, which should be funded by the Union Government. The DSGMC has also invited the President to inaugurate Baba Baghel Singh Museum at Gurdwara Bangla Sahib.

Previous: The importance of Kaur
Next: Sikh community helps out police and fire service during evacuation in Bristol