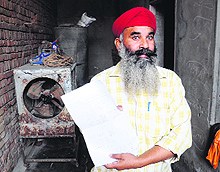 Bathinda, Punjab: Residents of Mungaska village in Alwar district of Rajasthan, who were uprooted following the 1984 Sikh genocide, continue to struggle even 30 years after the violence that shook the nation in the wake of the assassination of the then Prime Minister Indira Gandhi.

Unlike Delhi where the government to offered help to the victims after the riots, people from this part of the country have no hope of any help.Even those at Hondh Chillar village in Rewari district of Haryana where 31 were killed and the entire village uprooted have come under the limelight and can expect a delayed relief.

In Mungaska village and nearby areas, houses and shops of the Sikhs were torched by the mob on November 1. Surjit Singh, who was only 10-year-old at the time of the riots and escaped death, remembers how the Sikhs saved themselves by hiding in a gurdwara for more than 20 days.

“It was November 1, 1984, when the mob came to our village. Besides Sikhs, other communities, including Muslims, Gujjars, Jats, were also living in the village. The mob torched some of the vehicles, including our two tempos. My father was a transporter and the vehicles were used for transportation.”

“Our houses were locked and the villagers told the assailants that some Sikhs had been killed and others had left the village. The villagers didn’t allow anyone to enter the village and the gurdwara. Later, our family came to Bathinda where my sisters were married. After the 1984 genocide, my father went into a deep shock and died of heart attack in September 1985 in Bathinda.”

I do not remember the village’s name where a number of Sikhs were killed in Alwar district but my father Matwal Singh had then told me that almost all Sikhs were killed in that village, including his friends. As a transporter my father used to visit the village and had good relations with some of the Sindhi Sikh families. In our village, no one was killed but the Sikh families lost everything, including their business and houses,” added Surjit Singh.

Similarly, another victim Dr Anokh Singh has been residing in Bathinda since the riots and lost his clinic that he used to run in Jaipur, Rajasthan. “I worked hard and learned acupuncture treatment therapy from Singapore and used to run my centre in Jaipur but on November 1, 1984, it was set on fire by the goons. I returned to my family in Tibbi village of Hanumangarh district in Rajasthan. After some days, we shifted to Bathinda. I did not lose anyone from my family but my business was ruined,” said Dr Anokh Singh.

Kin of Sikh Genocide victims to get Rs 5 lakh compensation