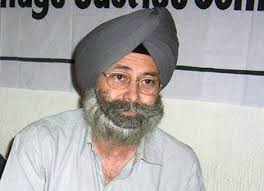 In a letter written to Union Minister of Home Affairs Rajnath Singh, Phoolka said for the past 30 years, the leaders who are responsible for killing Sikhs in November 1984, had been provided the highest security cover, including about 30-40 security guards.

They have also been provided palatial bungalows and number of cars at the expenses of public.

“People like Jagdish Tytler and Sajjan Kumar have been enjoying this luxury at public expenses for the past 30 years. The leaders like H.K.L. Bhagat and Dharam Das Shastri, who have now died, also enjoyed this luxury throughout their lives. Not only these, large number of other persons are provided security,” the letter said.

It said “Balwan Khokhar, who is now convicted for murder, was also provided the security cover.

Another accused Mahender Yadav, who is convicted for instigating riots, is till today enjoying the security cover as he is on bail.”