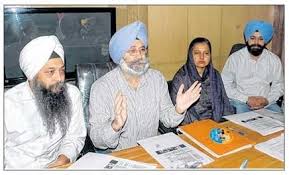 Comments Off on Phoolka motivates rural youth for change 887 Views

Phoolka along with other party leaders was accorded warm welcome as he reached Chakar village near Jagraon, the last village of the constituency. A march was also carried out in the village with volunteers holding ‘jhadus’, their party’s election symbol.

Addressing the villagers, Phoolka said he had not come to seek votes or offer false assurances as leaders of political parties generally do during elections. “I have come to ask the people of this village, particularly the youth, to join us in changing our state and the country the way you have changed your village,” said Phoolka evoking applause from the gathering.

Phoolka chose to sit among the villagers to interact with them.

Chakar village, having a population of around 10,000, is perhaps the only village in Punjab which has a lake with boating facility besides proper sewerage system and wide roads. The villagers turned three ponds into clear water lakes and installed sewerage treatment systems with support from some NRIs.

The village is also known for Sher-e-Punjab Sports Academy which has produced several boxers of national repute.

Prove what you did for ’84 genocide victims: Phoolka takes on SAD