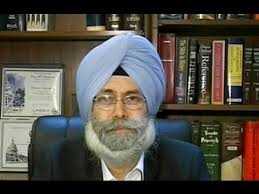 Bathinda, Punjab: Advocate HS Phoolka, who has been spearheading a campaign to seek justice for the 1984 Sikh genocide victims, wants to contest the Lok Sabha poll on the AAP ticket from Ludhiana.

“I have not come to the city to gain any political mileage, but to highlight the injustice meted out to the 1984 genocide victims who were killed without any fault of theirs,” Phoolka said here today. He was on a personal visit to meet his friends and relatives.

The human rights activist said the issue of contesting elections from Ludhiana had already been discussed with senior party leaders in Delhi. “As of now, I do not have an office or a position in the party. I am only a registered party worker and have offered my services to campaign across the country,” he said.

Previous: Trial of four cops sought in 1984 Genocide case
Next: ’84 genocide: Cops told to clarify on destruction of records