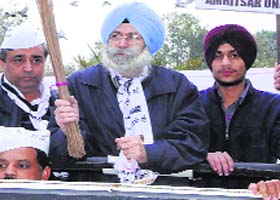 Comments Off on Phoolka begins campaign in Ludhiana 281 Views

Talking to The Tribune, he said: “ Our party is for recalling MPs and MLAs who fail to live up to the expectations of voters.” Phoolka, who did matriculation from Government High School, Bhadaur, a few kilometers from Barnala, said for him it was back to his roots. After LLB from Panjab University, Chandigarh, Phoolka started practising in the Delhi High Court and the Supreme Court.

Before that, he did B.Sc (Agriculture) from Punjab Agricultural University, Ludhiana. “I did a course from the Ludhiana flying Academy to become a commercial pilot,” he said.

Phoolka, who is associated with the Gian Sewa Samiti, has been helping students in Punjab to prepare for medical and engineering entrance exams. He is also associated with Edusat.

Phoolka has launched community farming projects in the state. “Community farming is being done in certain villages of Moga and Ferozepur districts. I organised a people’s march against the use of drugs during the SGPC and assembly elections,” he said.

Phoolka, who launched his campaign today, said his wife had taught in Ludhiana for some years before moving to New Delhi. “After the 1984 Delhi genocide, we decided to shift back to Punjab. When I went to Delhi to bring our luggage, I was told that genocide victims in relief camps needed advocates to get their complaints registered. I visited some camps and decided to stay on in Delhi to help them get justice,” Phoolka said.