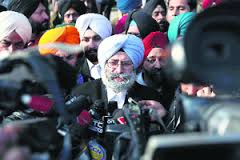 Chief Minister Parkash Singh Badal demanded the setting up of a special court, headed by a Supreme Court judge, to look into the 1984 Sikh genocide, “deliberate shielding” of the culprits and “delay” in justice.

Winding up the debate on the motion of thanks to the Governor’s address, the Chief Minister said his party was also not averse to the setting up of a SIT (special investigation team). But, the SIT should only function under judicial supervision, he demanded.

Badal said all closed case should be reopened and tried in fast-track courts to ensure speedy justice. He also demanded “adequate” compensation to the victims.

Phoolka said Badal’s statement in the Punjab Assembly was thoughtless. “A special court is constituted for trial of cases and is headed by a Sessions Judge. For constituting a special court, an Act needs to be passed by Parliament or the assembly. Both Parliament and the Delhi Assembly have been suspended. Hence, no such Act can be passed in the near future,” he said. Phoolka said only three riot cases were pending trial. “It is illogical that a demand for a special court is being made to try only three cases.”

Phoolka said: “ Without a reinvestigation, the cases cannot be reopened. Thus, the demand is baseless.

“As many as 237 FIRs have been closed by the police. To reopen these cases, the Kejriwal Government had recommended a Special Investigation Team. Ironically, the SAD opposed it.”