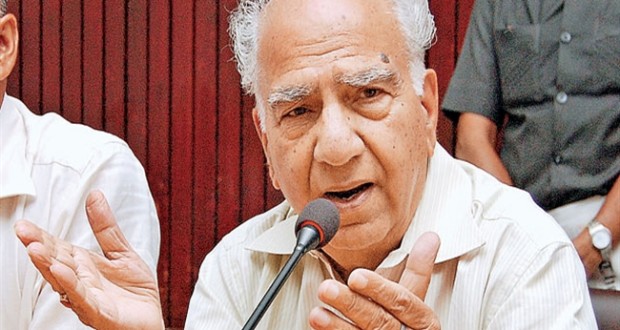 Comments Off on Persuade Badal to shun protest: Centre to Shanta 657 Views

New Delhi: The Centre has opened a channel with Punjab Chief Minister Parkash Singh Badal through in charge of BJP affairs in the state, Shanta Kumar to prevail over him not to precipitate matters but have faith in its ongoing efforts to resolve the row over the creation of Haryana Sikh Gurdwara Management Committee (HSGMC).

Union Home Minister Rajnath Singh deputed Shanta Kumar to speak to Badal when the former Himachal CM met him yesterday and discussed political situation in Punjab in the wake of the formation of the HSGMC. During the meeting, it was felt that swift action was needed to resolve the crisis before things went out of control.

Centre’s move opening a political channel with Badal comes in the backdrop of the latter declaring that he would launch an agitation against the creation of the HSGMC. In an ominous tone, he has also made it known that it was a fight between the Sikh Panth and the Congress.

Also, speculation is rife that Badal will tender his resignation as CM during the proposed agitation against the separate Sikh gurdwara body in Haryana. Reports suggest that he could also court arrest in Haryana.

Shiromani Akali Dal has convened a meeting of its core committee on July 26 to take stock of the evolving scenario and chalk out details of the proposed agitation. Also, a World Sikh Conference is scheduled at Golden Temple on July 27.

On their part, Sikh leaders in Haryana have refused to buckle and are steadfast in supporting the HSGMC setting a stage for a confrontation. They have also convened a meeting of Sikh leaders from all over the country in support for the Sikh gurdwara body at Karnal. They have decided to invite Akal Takht Jathedar Giani Gurbachan Singh to take part in the meeting.

Sources in the BJP said Shanta Kumar reasoned with Badal that anti-social elements and forces inimical to the country could take advantage of his proposed agitation.

Shanta also told him that the agitation could have an adverse fallout for both the Akali Dal and the BJP.

Sources said that the Punjab BJP president Kamal Sharma has also been told to be in touch with Badal not to exacerbate situation through his proposed agitation.