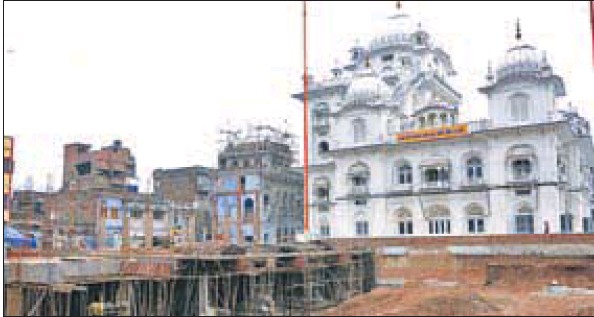 Patna: Massive revamp and beautification plans are underway here for the 350th birth anniversary of Guru Gobind Singh, the 10th guru of Sikhs, at Takht Sri Harmandir Sahib in 2017.

The work is on in full swing and the office-bearers of the parbandhak committee, Takht Sri Harmandir Sahib, are constantly monitoring the progress.

A massive revamp plan of Takht Sri Harimandir Sahib at a cost of ` 600 crore is already being executed. The ambitious project, which includes a golden Guru Durbar on the lines of the Golden Temple in Amritsar, is scheduled to be completed before January 5, 2017.

The committee has also sent a proposal of ` 1,200 crore for all-round development of Patna Sahib in view of the mega celebration to the Centre with a request for the Holy City status to Patna Sahib, the birth place of Guru Gobind Singh.

The work on the ambitious project got underway recently, following the laying of the foundation stones at four different places in and around the Takht Sahib. “Baba Mohinder Singh from the UK is bearing the expenditure of developing the Guru Durbar — both inside and outside. It will include a provision for car parking for 100 vehicles,” said Takht parbandhak committee general secretary Charanjeet Singh.

What attracts attention at the sprawling gurdwara is the intricate gold inlay work being done on the ceiling of Takht Sri Harmandir Sahib. Expert artists have been roped in for the delicate work.

Junior vice-president of Takht Sahib RS Jeet said that after the new committee took over two years ago, the development work had gathered momentum. “We want it to be developed on the lines of the Golden Temple,” he added.

“The work to renovate the Guru Darbar started in April last year. The work is expected to be completed by 2016. The entire project of gold work on the ceiling is likely to cost ` 50 crore. Of this, ` 30 crore will be spent on construction work while Rs 20 crore is the budget for intricate designing,” said Jeet.

In view of the mega celebrations, chief minister Jitan Ram Manjhi recently visited the Takht Sahib to know about the development work planned.

The chief minister promised all help to the committee.