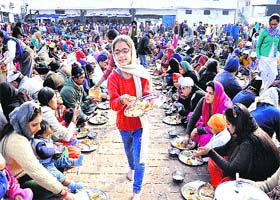 Comments Off on Parkash Purb celebrated with fervour, gaiety 380 Views

Jalandhar, Punjab: City residents celebrated the 348th Parkash Purb of Guru Gobind Singh with religious fervour and gaiety. Gurudwaras across the city were illuminated with lights. The celebrations started with the bhog ceremonies of akhand paths that started since Sunday in all the gurudwaras across the city. Thousands of people thronged the religious shrines on Tuesday.

Prominent kirtan jathas from all over the state mesmerised the devotees by singing religious hymns from Guru Granth Sahib.

Earlier on Sunday, various competitions for children related to religious wakefulness were organised at various gurudwaras. “Various competitions related to shabad kirtan, dastaar bandhi and debate were held on the gurudwara premises in which more than 200 children took part. All the children were given prizes and certificates on the occasion. Around 4,000 devotees visited the Gurudwara on the sacred day and sought the blessings of almighty,” said Parminder Singh Dimpi, general secretary, Central Town Gurudwara. He said many devotees have put up stalls outside the gurudwaras for the devotees coming from far off places.

Prominent Kirtan Jathas had been called to sing religious hymns from the holy verses of Guru Granth Sahib and enthral the devotees on the sacred occasion. “Along with other events a special lecture on the life of the tenth guru was also held by SS Iqbal Singh at the gurudwara. Community Kitchen served langar throughout the day,” said Atam Prakash, president, Model Town Gurudwara. He said elaborate parking and security arrangements were made by various gurudwaras to cater to lakhs of devotees visiting the shrines.