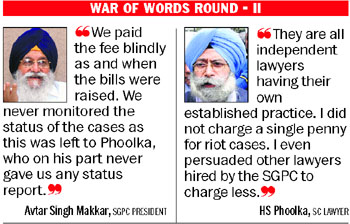 Amritsar, Punjab: SGPC president Avtar Singh Makkar today said the SGPC had paid over Rs 42 lakh as fee to lawyers, including a panel of five advocates recommended by HS Phoolka, to contest the cases of 1984 Sikh genocide victims.

In a statement released here today, Makkar said the SGPC had passed two resolutions in April and August 2010 to pay fee to a panel of five lawyers recommended by Phoolka. He said the lawyers were to represent riot victims in different courts in Delhi. He said the SGPC paid the fee “blindly as and when the bills were raised”.

“We never monitored the status of the cases as this was left to Phoolka, who on his part never gave us any status report,” Makkar said.

However, nowhere did the SGPC chief’s statement mentioned that any particular amount was paid to Phoolka. The statement was not released from the SGPC’s official mail ID and was not in Punjabi language as is the practice. It was written in English which is unusual.

Makkar said the SGPC was “vigorously” following the cases and it was wrong on the part of Phoolka to “make it appear as if he is the lone champion” of the genocide victims. He said after eight victims lost their cases in the trial court, the SGPC filed review petitions on behalf of all the victims in the High Court on which the SGPC had spent Rs 32.55 lakh. Makkar said: “It is unfortunate that Phoolka is trying to take political mileage out of what is essentially a human tragedy”.

Phoolka hit back at the SGPC, saying that none of the five advocates mentioned by the SGPC were his juniors. “They are all independent lawyers having their own established practice.” He reiterated that he did not charge a single penny. He said he even persuaded other lawyers to charge less.