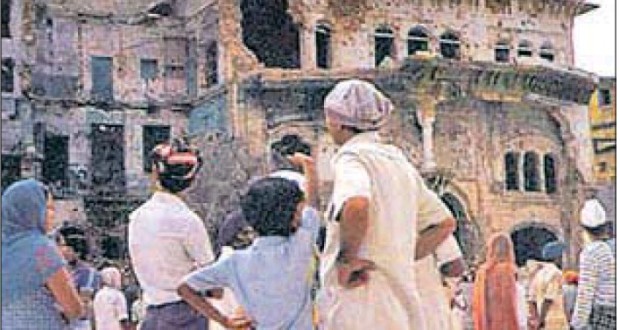 Chandigarh:  With the 30th anniversary of Operation Bluestar just a week away, it has come to light that the army action was apparently not the idea of then Prime Minister Indira Gandhi but of the trio comprising her son Rajiv Gandhi, nephew Arun Nehru and Rajiv’s adviser Arun Singh with an eye on sweeping the 1984 Lok Sabha elections.

This claim has been made in the report, ‘The Shattered Dome’, which appears in the magazine The Caravan’s May issue. The report, written by the magazine’s political editor Hartosh Singh Bal, carries interviews with veteran journalist Kuldip Nayar and Indira’s former personal secretary RK Dhawan.

Quoting Dhawan, the report said the trio believed that a successful army operation against militant leader Jar nail Singh Bhindranwale could enable them to “win the elections hands down. That was weighing on their minds as the elections were due (later in 1984).”

The report says, “The dismal story of Operation Bluestar had been set on its track by Sanjay Gandhi, but it now appears that its disastrous conclusion was the work of his brother Rajiv, who swept to power with the biggest mandate in Indian history following his mother’s assassination. Operation Bluestar was not just Indira’s last battle; it was the first, and perhaps the most disastrous, of Rajiv’s blunders.”

“Indira Gandhi, who had evidently approved Bluestar with the greatest reluctance, regretted the operation immediately, according to Dhawan, who was with her when she first saw images of the damage to the shrine,” the report added.

According to the news story, she was horrified to see the footage of the Golden Temple. The footage was brought by Rajiv’s adviser Ar un Singh. “Ar un Singh was there, Rajiv was there, Arun Nehru [Indira’s nephew] was there. She said she had been let down,” the report quoted Dhawan as saying.

As per the report, Indira was opposed to the army action till the last minute. “It was being convinced by the army chief and this trio that eventually changed her mind,” it said, quoting Dhawan.

RAJIV’S INVOLVEMENT IN PUNJAB AFFAIRS
According to the Caravan report, the other evidence supports Dhawan’s claim that many of the decisions leading up to Bluestar were guided by Rajiv, Nehru and Singh. After Sanjay, it was Rajiv who had begun to deal directly with Punjab affairs. “Most of the dialogue with the Akalis was carried out under his (Rajiv’s) supervision, in tandem with Nehru and Arun Singh,” the story said.

In a separate interview, Nayar confirmed Dhawan’s assertions about those who i nst i g at e d Indira (on Bluestar), from a meeting with Arun Nehru when he had come to stay with him, when Nayar was the Indian high commissioner in London in 1990. According to the report, Nayar asked him who had taken the decision to go ahead with Bluestar. “He s ai d, ‘Phuphi [aunt Indira Gandhi] was very opposed to it’. Rajiv and Arun Singh were very much in favour of it. He did not take his own name, but at the time he was very much with the other two.”

During the interview with The Caravan, Dhawan confirmed it further, “Arun Singh was involved in it, there was no question about it, but he was acting through Rajiv,” he said. “The main thing was that he was in touch with General K Sundarji. Sundarji had overestimated himself, and he was acting through Arun Singh.”
HOPES OF POLL GAINS
Dhawan said the trio felt that as a result of a successful army operation against Bhindranwale, “they would be able to win the elections hands down.” He confirmed that they expressed this viewpoint to Indira.

“At that time, to my knowledge, the trio was functioning together. Arun Singh — from the beginning, two to three months before Bluestar — was insisting on army action… Arun Nehru, Arun Singh and Rajiv Gandhi were all one, sharing all the things,” the report quoted Dhawan.