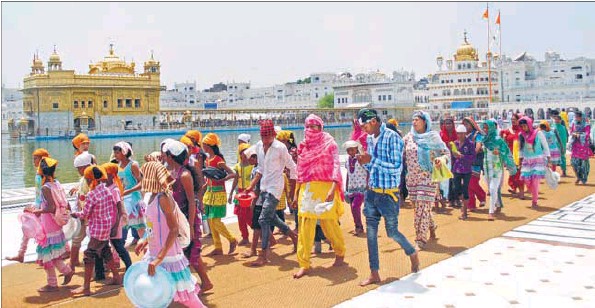 Normalcy returns to Golden Temple a day after clash

Amritsar, Punjab: Normalcy returned to the Golden Temple on Saturday with a large number of devotees paying obeisance at the shrine that witnessed a bloody clash on Friday between the Shiromani Gurdwara Parbandhak Committee (SGPC) task force members and a group of radicals.

“The rush at the shrine was normal with the usual long lines of devotees waiting for their turn to pay obeisance at the sanctum sanctorum,” said an SGPC official at the information office of the shrine.

This showed that the clash on the 30th anniversary of Operation Bluestar at the Akal Takht had not scared the devotees. This was in contrast to the post Operation Black Thunder days, when even a minor incident inside the shrine would have an immediate impact on the devotees the following day.

The clash had scared the pilgrims who were present inside the shrine when it occurred.However, by the evening, everything retur ned to normal and those who had checked in at the serais in the shrine complex at noon on Friday preferred to stay on and did not go back without paying obeisance, SGPC officials told HT that in the late eighties such incidents would be followed by pilgrims vacating the serais and moving out into nearby hotels and guesthouses.

However, despite nor malcy having returned, the SGPC task force remained alert inside the complex. Police were also on the alert, particularly in the vicinity of the Golden Temple and in certain parts of the old walled city. Additional policemen have been posted in the markets opposite the Clock Tower entrance of the shrine and even outside the main entry and exit gates leading to the serais and SGPC offices.

A joint team of the SGPC and the police saw the CCTV footage to identify those responsible for the clash. The cops have not ruled out arresting a few more persons. The arrest of SAD (Amritsar) leader Simranjit Singh Mann has also not been ruled out, though a case is yet to be registered against him.