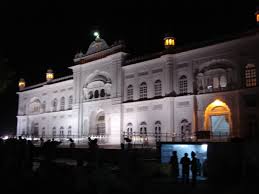 Anandpur Sahib, Punjab: The SGPC today decided to build a 500-room serai near Takht Sri Kesgarh Sahib. The “kar seva” for the purpose has been handed over to Baba Kashmir Singh Bhuriwale.

Talking to mediapersons over the consent to Haryana Sikh Gurdwaras (Management) Bill, 2014, by Haryana Governor Jagannath Pahadia, Makkar alleged Pahadia was acting at the instance of the Congress. Makkar said he met Pahadia this morning on the issue and he assured him that it being a religious issue, he would forward the case to the Union Home Ministry.

* Initially, 350 rooms will be constructed in the five-storey building

* Baba Kashmir Singh Bhuriwale will do the “kar seva”.