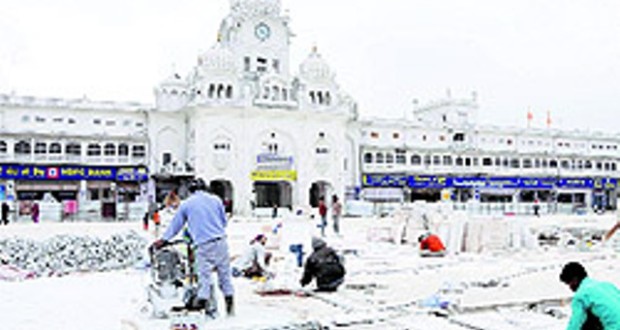 Amritsar, Punjab: The ongoing work on the Darbar Sahib Entrance Plaza project has gathered steam. The companies involved say the work on the sprawling open area may be completed within the next couple of months.

Sources say the construction of the marble flooring of the plaza has picked up pace. The temporary ‘jora ghar’, which was raised to facilitate the plaza construction, has been demolished to make way for more open space. When opened, the area measuring 8,250 sq metres in front of the main entrance of the holy shrine will ease congestion as it is visited by thousands of devotees daily.

The government had partially opened the plaza during Diwali last year to ease congestion at the main gate of the shrine. It had also placed benches around the trees for the pilgrims’ convenience. Besides, the new ‘jora ghar’ (shoe-keeping facility) and ‘gathri ghar’ (baggage room) were also opened.

However, it will take a little longer to set up the facilities in the basement of the plaza. Among the underground facilities are a state-of-the-art interpretation and information centre for tourists, VIP lounge, bank, ATM, airlines and railway inquiry, a multipurpose hall, security and services area, toilets and other public conveniences.

As there is a lot of VVIP movement at the Golden Temple, the plaza will have a separate lounge to accommodate dignitaries and their entourage. An auditorium with a seating capacity of 100-150 persons would be built so that a visiting dignitary could address the media. At present there is no designated area in the Golden Temple complex where mediapersons can interact with the VIPs.

The plaza has been designed in view of the fact that thousands of devotees visit the shrine daily and they need to have access to basic amenities. During special occasions such as Gurpurb, the number of devotees crosses 1 lakh. The project began in in May 2011.

Previous: Farmers in both India and Pakistan’s Punjab suffering
Next: Sikh historian among three honoured 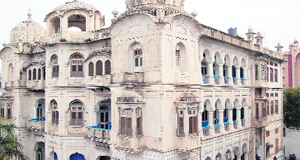