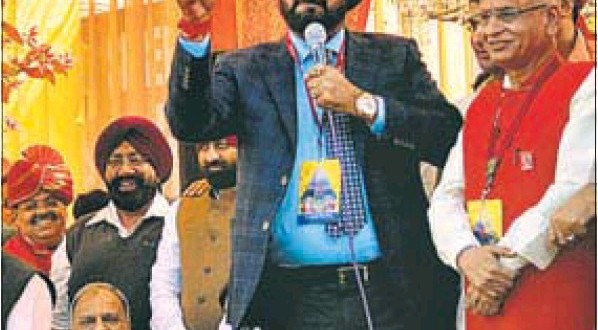 Ludhiana, Punjab: Continuing his outburst against the Shiromani Akali Dal (SAD ) , former Bharatiya Janata Party (BJP) MP Navjot Singh Sidhu called upon the people to give their verdict against corrupt leaders in the next assembly elections.

Sidhu refrained from naming the party or leaders as he was addressing people at the Jagannath Rath Yatra in Ludhiana but he did not hold back the retort.

The widening rift between the SAD and the BJP was evident from the fact that not a single Akali leader was present on stage while the function was attended in large numbers by BJP leaders from the city.

It is noteworthy that in the past, Punjab chief minister, along with the chief ministers of Haryana and Himachal Pradesh, had attended the yatra.

This is the first time that the organisers chose to invite Sidhu.

Refer ring to the rulers of Punjab as “dusht” (evil), Sidhu said the time had come when people should free the state from their clutches. Mocking the slogan “raaj nahi sewa” given by deputy chief minister Sukhbir Singh Badal, the former MP said, “Sewa taa sirf 10% hi hei, baaki 90% taa eh mewahi khaa rahe han” (Only 10% is service while the remaining 90% accounts to leaders having a good time).

Known for his oratory skills, the BJP leader said, “Mahabharata wich Arjuna kalla hi Pandava de naal ladya si teh hun mei wi kalla haa lekin ajj mein bhagwan jaganath di yatra te bigul baja riha ha is umeed naal ki tussi mera saath deoge…” (In the Mahabharat, Arjun fought the battle alone for the Pandavas. I am also alone today but on the occasion of the Rath Yatra, I am giving a clarion call in the hope that you all will support me), to which the crowds shouted slogans in his favour.

A senior Congress leader termed the absence of SAD leaders as a “fall out” between the government and the business community owing to the faulty policies of the state government which had gone against their interests.