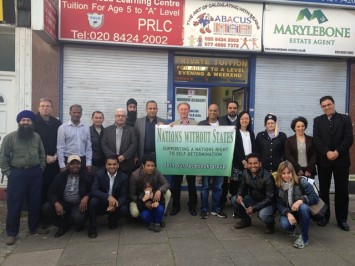 London, UK: The pressure group Nations Without States (NWS) is urging diverse communities of Scotland to vote yes in the forthcoming Scottish Referendum. NWS is a collective umbrella of multiple campaign groups representing global national freedom movements such as Tamil, Sikh, Kurdish, Borneo, Matabele, South Azerbaijan, Kashmir and Baloch. Its activists are encouraging their respective diverse communities e.g. Sikh, Tamil, Kashmiri and Kurdish in Scotland, to vote YES on 18th September 2014. Campaigners plan to text, email and phone 10,000 contacts over the coming weeks in Scotland to support independence for Scotland, and use ethnic community media to profile and debate the Referendum. “This is a great opportunity for the people and communities of Scotland to take a positive, decisive stand for Scotland,” say Nation Without States campaigners.

“Independent statehood is a sign of a people maturing to a position of self-responsibility, self-control and self-confidence. This is a natural and equal right.” Scottish independent statehood represents a natural devolution and separation of power, from an overly concentrated central power structure in London. “Big imperious states and centralised power remain an enduring, global menace to justice, human rights, democracy – from Roman times to the present big states like India and China.” Say campaigners. Real, authentic national peoples of the world have been long deprived of their fundamental right to control and determine their own affairs, and function and develop as equals on the world stage – instead of the current monopoly by artificial nations. Why should some have independent statehood and others not?

The referendum represents a powerful message to the governments of the world, which continue to deny the paramount international right of self determination and suppress and repress communities like the Tamil, Kashmiri, Sikh (Panjaabi), Palestinian, Matabele, Kurdish and Borneo. Scotland is a wonderful example of people being allowed freely, democratically and peacefully, to exercise their collective will and freely and openly debate, discuss and dialogue about their political status. Tamil, Kashmiri, Sikh, Palestinian, Matabele, Kurdish, Borneo and multiple other nations remain deprived of the same free and open referendum. For example, a 1948 resolution calling for a referendum on Kashmir has continuously been blocked and denied by India for the last 60 years plus. “This is a blatant breach of the most fundamental principle of the UN Charter – self-determination and democracy.” Nation Without States believe it will provide a powerful inspiration to freedom movements in Catalan, Basque, Sikh (Panjaabi), Kashmir, Tibet, Kashmir, Borneo, South Azerbaijan and multiple other regions of the world. Campaigners from these groups are expressing a collective hope that the current and new, independent Scottish government will become a strong voice for these global national causes.