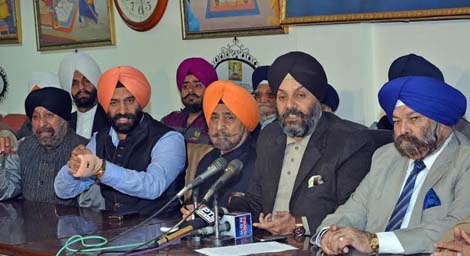 DSGMC president Manjit Singh GK asked Modi that the Sikh community across the globe wants this and naming road after the ninth guru would be a befitting tribute to the guru who chooses to lay his life for the cause of humanity.

Guru Tegh Bahadur was martyred in Chandni Chownk on the orders of then Mughal ruler Aurangzeb in November 1675. Guru’s martyrdom day falls on November 24, Monday.

“The martyrdom day be declared a gazetted holiday across the country, so that message of universal brotherhood given by the guru reaches every corner of the country.

“With the BJP-led National Democratic Alliance leading the Government of India aspirations of the Sikh community would be fulfiled,” said Manjit Singh GK.

A petition is also being signed online for declaring the road name of guru’s name.

The DSGMC has also written a letter to Modi for making announcement of declaring a gazetted holiday to mark the martyrdom day and renaming of the Aurangzeb Road after the ninth guru.

In the letter the DSGMC president said the supreme sacrifice of Guru Tegh Bahadur Sahib binds the society of present day India must be paid a tribute so that the Sikh community gets a clear message that the present set up in the Government of India belongs to them.

“Guru Sahib is a symbol of communal harmony, he does not represent one religion but he is a symbol of universal peace hood, and declaration of his martyrdom day a national gazetted holiday is everyone’s demand and this day be celebrated as peace and harmony day,” demanded DSGMC general secretary Manjinder Singh Sirsa.