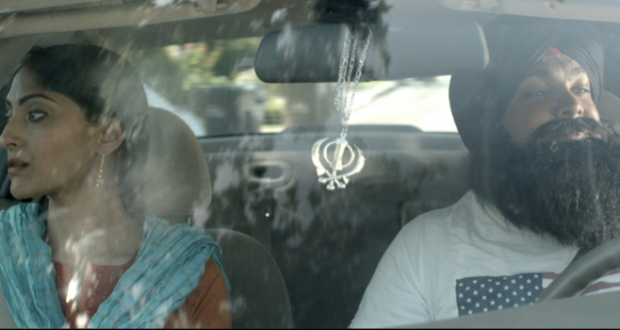 My Dear American,” looks at how a Sikh immigrant couple spend their Fourth of July

Comments Off on My Dear American,” looks at how a Sikh immigrant couple spend their Fourth of July 629 Views

There’s a good chance you’re out barbecuing for the Fourth of July.
It’s an American tradition, and it’s also the subject of short film, “My Dear Americans,” about a young Sikh couple who have just moved to the US. The film was selected as part of the 2014 PBS Online Film Festival.
“I thought it would be interesting to take a tradition, an American tradition, but present it from the point of view of an outsider because it’s the most American and the most patriotic,” says Arpita Kumar, the film’s director .
The plot of the film is simple: a young Sikh immigrant couple heads to Costco to prepare for their Fourth of July barbeque when they come face-to-face with a neighborhood hate crime.
But the film unearths issues that highlight what it means to be American, and they’re complex. For example, the husband in the film — a jolly man sporting a beard and turban — is gung-ho about living in the US. In a T-shirt plastered with an American flag, he literally wears his patriotism on his chest.
His wife, Tejpreet, however, struggles with her new American identity.
Kumar says the film was prompted by the 2012 Sikh temple shooting in Wisconsin, in which a white supremacist opened fire in a gurdwara, a Sikh place of worship. The shooter killed six people in the temple.
“It was really shocking,” Kumar says, “because it was more than a decade after 9/11 and there was still so much ignorance about the Sikh community. And what I realized was that you can’t do much about the ignorance of others, but what you could do is change your reaction to that ignorance.”
Kumar came to the United States more than 11 years ago for college. “I was more aligned with the husband [character],” she remembers. “I was really enthusiastic. The night before I came to the US, I couldn’t even sleep, I was so excited about it.”
She based many of the scenes off of experiences she had during her first years here, weaving in moments “when I was overwhelmed and .. when I would retreat inward.”
One of those overwhelming moments, Kumar says, was her first trip to a massive store, days after arriving to begin college.
“They took us to Target, and I’m from a small part of India  and I had never been to such a huge supermarket. The fluorescent lights and the variety and the choices — [I] didn’t know how to navigate it,” Kumar says. “It was really overwhelming and I think it was the first terrifying moment of my life.”
In the film, the characters head to Costco and feel a similar way, ambushed by the fluorescent lights and overwhelming variety of food. From the wife’s point of view, the room was spinning.
At her own first Fourth of July celebration, Kumar remembers being in New York City with a friend. “I was talking to her, and suddenly she turns me around because my back was towards the fireworks,” she say. “And I see the whole sky explode into amazing fireworks and it blew my mind.
The fireworks reminded Kumar of a holiday back home. “In India we have Diwali, which is a Hindu festival of lights in which we have fireworks,” she says. “So for the next two years I wished everybody a Happy Diwali on the Fourth of July because, for me, it was just like Diwali.”