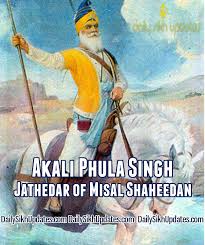 THE DEATH OF PHOOLA SINGH – extract from the poem by R.W.Bingham

And fiercer raged the stubborn strife, not so unequal then,
But Phoola Sing, the Nihung Chief, had lost three hundred men.

Himself once more was wounded, still like a flaming star,
Leading the strife, was fairly seen his flashing scimitar:

And fiercer still the battle grew, and louder still was cried
The “Allah Ho,” from Moslem ranks—”Wah Khalsajee,” replied.

And still the Sikhs press on; the Khalsa bayonets thrust,
Makes many a brawny Affghan to bite the trampled dust:

But Phoola Sing has fallen ;—his leadership is o’er,
The doubly gallant Chieftain, lies weltering in his gore.

He fell on “Terees” top; he saw the black banner fly
Close by his side,— the guiding star which led to Victory;

He raised his thrilling cheer once more, the bullet pierced his brain.
He fell, on heaps of slaughtered foes;— he’ll never fight again.

Then rose from Khalsa ranks the yell of anguish and of ire,
They fiercely rushed upon the foe, like a devouring fire;

In vain, in vain were sword and lance, in vain were helm and targer
Nor foot, nor horse, could there avail, ‘gainst that resistless charge.

The Moslem ranks are wavering now, their banners rent and torn.
“Wah Gooroojee,” once more the cry, and down the hill they’re

As well resist an avalanche, or whirlwind in its force,
As try to stem the dreadful rush of bayonets in their course.

The plain and hill, were covered o’er, the Loonda full of slain,
And since that day, the Affghans ne’er have dared the strife again;

But since the death of Phoola Sing, have crouched before our power.
While we have ruled by right of arms the valley of Peshawur.

Previous: Sikh Truck Driver Shot Outside His Home in California
Next: Fasting NRI crusades for blacklisted Sikhs’ cause