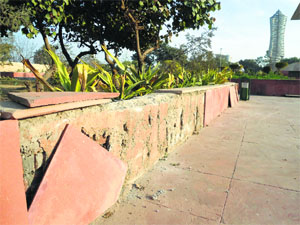 Muktas memorial a picture of neglect

Comments Off on Muktas memorial a picture of neglect 451 Views

Muktsar, Punjab: Devotees from across the state and other parts of the country have started arriving in this historic town to take a dip in its holy “sarovars” on Maghi, which falls on January 14. The occasion is observed in memory of 40 Muktas who sacrificed their lives fighting against the Mughals in 1705.

Ironically, the monuments built in their memory are lying in a poor condition. The Mukt-e-Minar, having the tallest “khanda” (81-ft), is in a state of neglect. Neither the SGPC nor the district administration has bothered to maintain it.

The rings girdled with the “khanda” are now covered with rust. The wall tiles are crumbling. The lights installed to illuminate the “khanda” are missing. Plants grown to beautify the monument are drying up.

Locals claim since the monument was built in 2005 during the Congress government, the SAD-BJP government is not bothered for its upkeep.

Instead, it had laid the foundation stone of another martyrs’ memorial on the Tibbi Sahib road here, but not a single brick has been laid so far.

The issue of its construction seems to have been “dumped” as neither its design nor name has been finalised as yet.

Besides, memorial gates built on the outskirts of the city are also in a bad shape.

The issue has been raised a number of times before Chief Minister Parkash Singh Badal, SGPC chief Avtar Singh Makkar and Deputy Commissioner Parmjit Singh, but to no avail.

* The Mukt-e-Minar was built in memory of 40 Muktas who died fighting the Mughals in 1705.

* Neither the SGPC nor the district administration has bothered to maintain it.