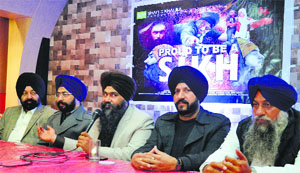 Director Satdeep Singh said the movie had the message of universal brotherhood, which is the foundation of Sikhism.

“Proud to be Sikh” is a story of a college professor who went abroad during genocide and when he returned to Punjab, He was shocked at the behavior of young Sikhs who had forgotten Sikh values. He struggled to bring them back to the roots and made them realize the great human values of Sikhism.

Songs of the movie were in hip-hop style but their message was rooted in quintessential Sikh values. The movie is scheduled to be released on April 4. Most of the movie was shot in and around Ludhiana.