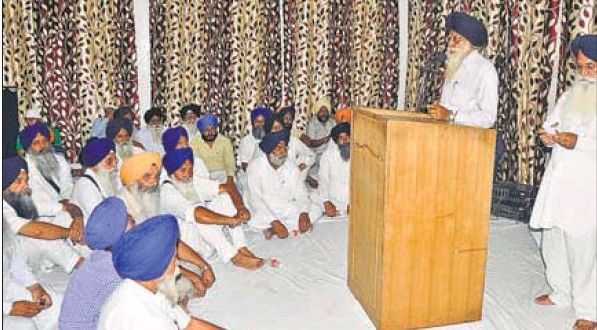 Panchkula, Haryana: A meeting chaired by Punjab Rajya Sabha MP, Balwinder Singh Bhunder, was held at Nada Sahib gurdwara on Saturday. The meeting was held to mark protest against the move to have a separate managing committee for gurdwaras in Haryana as the Sikh political leaders are demanding another gurdwara managing committee, apart from Shiromani Gurdwara Parbandhak Committee (SGPC), in the state.

Bhunder said Haryana chief minister, Bhupinder Singh Hooda, had been encouraging this demand for his own political interest. He added that Hooda should take this as a warning and should not interfere with the religious sentiments of the masses.

Bhunder said: “The SGPC has been maintaining gurdwaras across these two states when Haryana and Himachal Pradesh states did not exist. It was a pact with for mer Prime Minister Jawaharlal Nehru who had agreed that SGPC will control all the gurdwaras.”

SGPC chief Avtar Singh Makkar was also to come for the meeting, but he skipped it for some reason. On Friday, the members of Shiromani Akali Dal (SAD) and members from SAD (youth wing) had also gathered at the Nada Sahib gurdwara in Panchkula, and condemned the demand of another gurdwara management committee in Haryana.

The meeting was addressed by SGPC member Harbhajan Singh Samana who condemned this demand of asking for a separate gurdwara managing committee for the gurdwaras in Haryana state.

Addressing the meeting, Samana said 90% of the Sikh population was with SGPC and the rest was being misled by the Congress in Haryana.