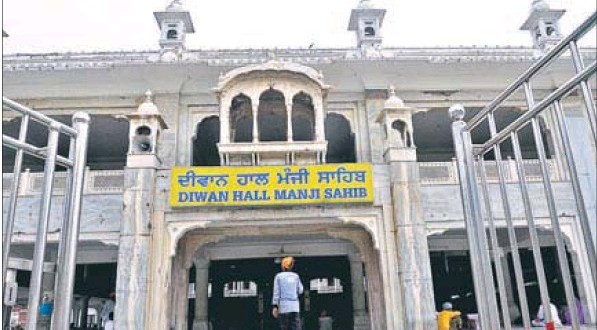 Morcha call to be history’s date with Manji Sahib hall

Amritsar, Punjab: With the neighbouring state in no mood to relent on the Haryana Sikh Gurdwara Management Committee (HSGMC), the focus now will be on the Panthic convention, being termed the World Sikh Conference, convened by Punjab’s ruling Shiromani Akali Dal (SAD) at the Manji Sahib hall in the Golden Temple complex here on July 27.

The conference will determine the future course of action that the Akalis led by Punjab chief minister Parkash Singh Badal, who control the Amitsar-head quartered Shiromani Gurdwara Parbandhak Committee (SGPC), would take to pressure Haryana CM Bhupinder Singh Hooda to retrace his steps.

With the Centre still undecided on the matter despite having taken legal opinion, the two ways left for the SAD were either to approach court or launch an agitation (‘morcha’). CM Badal has already made it clear that he is “ready to make any sacrifice for the cause of the Panth”. He has said he was even ready to quit as CM and spearhead the agitation against Haryana’s Congress government which, he says, has made the HSGMC only with an eye on Sikh votes in the assembly polls due soon.

RECALLING A MORCHA FROM ’82
Thus, history may well repeat itself to an extent, with Manji Sahib once again becoming the venue for launching another Dharam Yudh Morcha (Agitation for the Religion), a name that is already being mentioned. Former Damdami Taksal head Jarnail Singh Bhindranwale had launched a similar morcha on July 19, 1982, from Manji Sahib for seeking the release of his two associates. Bhindranwale was later killed in 1984 in army action to flush out militants led by him out of the Golden Temple complex.

The SAD, at its working committee meeting at Fatehgarh Sahib on July 26, 1982, had decided to join the morcha of Bhindranwale. The entry of the Akalis widened the scope of the agitation with the inclusion of issues like the Anandpur Sahib Resolution, the river waters issue and transfer of Chandigarh and Punjabispeaking areas of Haryana to Punjab.


BADAL ‘MORCHA DICTATOR’?
In the Bhindranwale-spear headed agitation, Badal had led the first SAD jatha (group) of 1,054 volunteers on August 4, 1982, from Manji Sahib to court arrest. This practice of courting arrest continued till a couple of days before the June 1984 Operation Bluestar, in which Bhindranwale was killed. Observers said that during the two years of protest around two lakh Akalis courted arrest in Amritsar. However, this time if the Akalis decide to court arrest, the venue of the actual morcha may be close to the border with Haryana.

Undeterred, the Hooda government has already announced a 41-member ad hoc HSGMC, and Sikh leaders of Haryana have also called a Panthic congregation at Karnal on July 28.

In case Badal quits and decides to spearhead the agitation— after, as is being speculated, handing over the CM-ship to son and deputy Sukhbir Singh Badal — there is every likelihood that he may assume the role of ‘morcha dictator’. During the 1982 protest, Bhindranwale and Longowal both were designated as the morcha dictators, which meant they did not court arrest as their task was to ensure the success of the agitation.

ARRANGEMENTS ON, SPACE A CONSTRAINT
Meanwhile, SGPC secretary Dalmegh Singh said all arrangements have been put in place for the July 27 convention. Entry section for VIPs would be completed by Friday evening. “Around 7000 persons can be seated in the hall and the balcony. The remaining will be accommodated in tents on the lawns opposite Manji Sahib and in the open space around. In all, 10,000-12,000 persons can be accommodated,” Dalmegh said. He said arrangements will also be made for the stay of participants at SGPC-run educational institutions, while devotees staying at serais (inns) at the complex would not be disturbed.”

SAD leaders are expecting a gathering of one lakh, and if even half that number turns up, it will be a difficult task for the SGPC to accommodate them. Senior SAD leaders are yet to visit the SGPC headquarters for making an assessment for the arrangements.

Amritsar police commissioner Jatinder Singh Aulakh, along with Dalmegh, visited the venue of the conference and discussed the security set-up. Around 2000 cops are expected to be on duty.

Previous: Sikh Temple claims ‘no shred of evidence’ donations were mishanded
Next: Badal prepares for ‘morcha’, his men for Sangat Darshan