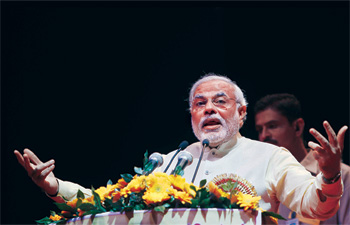 Modi is throwing us out, say Sikh farmers in Gujarat

Comments Off on Modi is throwing us out, say Sikh farmers in Gujarat 231 Views

A dozen-odd farmers, who are currently in Punjab, said that the Gujarat government has so far not withdrawn the special leave petition from the Supreme court, despite Modi making an emphatic claim in Punjab last month that no Sikh farmers would be evicted from Gujarat.

BJP’s prime ministerial nominee, Narendra Modi had assured the people of Punjab that the Sikh farmers in Gujarat were absolutely safe. This came from Modi as the opposition in Punjab had sought to corner both Modi and the Punjab government on the issue.

Talking about Sikh farmers in Gujarat at his Jagraon rally, Modi had said, “It is deliberate misinformation being spread by vested interested. No Sikh farmer will be evicted from Gujarat. If any officer tries to do that, that officer will no longer be around.”

But now, Sikh farmers from Gujarat’s Kutch region have put the Shiromani Akali Dal- BJP alliance in a tight spot. The farmers have said that despite Modi’s assurance, every effort is being made to snatch their farm land. These farmers say if Modi is sincere and true to his words, the Gujarat government should withdraw the case from the Supreme Court.

Lakhshman Singh Bhullar, a local farmer said, “We are here to support our lawyer and Aam Aadmi Party candidate Himmat Singh Shergill and we will tell the truth to Punjab people.”

These farmers are currently in Punjab to canvass for their lawyer Shergill who is contesting Lok Sabha election from Anandpur Sahib on Aam Admi Party ticket. Shergill says both Modi and Punjab Chief Minister Parkash Badal had been telling lies on this issue.

AAP candidate Himmat Singh Shergill said, “The High Court had ruled in favour of the farmers yet Modi has gone to the Supreme Court to get the decision reversed while Badal is supporting Modi on the issue. They are trying their level best to evict these farmers. Gross injustice has happened to these farmers and I will fight for them at every forum. ”

The Gujarat government had in 2010 frozen bank accounts of the Sikh farmers who had gone to Kutch district in 1965 at the exhortation of then prime minister Lal Bahadur Shastri, citing an old law that purportedly bars non-Gujaratis from buying land in the state. Though, the farmers won the case in the Gujarat high court, the Gujarat government challenged the High Court orders in the Supreme Court. The farmers say that the state government wasn’t implementing the high court’s order and their bank accounts were still frozen.

There are nearly 5,000 Sikh families in the Kutch area of Gujarat that are affected due to the Gujarat government’s decision to take back their land. The Gujarat Government orders stem from the Bombay Land and Tenancy Act, but the farmers say the government was misinterpreting the law.

Previous: The reachable royal
Next: The importance of Kaur