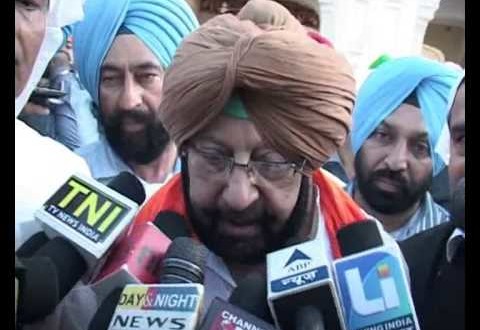 Amritsar, Punjab: Former Chief Minister and Congress candidate Captain Amarinder Singh finished off his election campaign on a grand note with scores of people joining his roadshow that passed through various places in the city on the last day of the campaigning.

Accompanied by all the local leaders including MLAs, sitting and former councillors and prominent party workers, Amarinder moved in an open vehicle. On the way, he was showered with flower petals.

Talking to mediapersons, Amarinder said he was overwhelmed with the love and affection of the people of Amritsar.

To a query, he said BJP’s prime ministerial candidate Narendra Modi was “alien to the idea of India and not at all secular”.

He asked Modi why he had “refused to pay obeisance” at the Golden Temple. “Or does paying obeisance at Darbar Sahib contrary to your beliefs and worldview?” he asked.

He said it was for the first time that a leader, who aspired to be the Prime Minister of a secular India had “avoided paying obeisance at Darbar Sahib” which had its doors open to all people, irrespective of their caste or religion.

The former Chief Minister said: “This reflects Modi’s true character. He publicly rejects the humble offer of wearing a skull cap, hurting millions of people, and now he choses not to pay obeisance at Darbar Sahib.”

Describing his rival’s personal tirade against the Gandhi family as a classic example of the pot calling the kettle black, Amarinder said it was an irony that Jaitley had led protests in Parliament against coal blocks allocations to private companies while “conveniently choosing to ignore his own stand and opinion a few years ago that benefited the Tatas and another company”.

Previous: The final destination — Almighty’s home
Next: Majithia not summoned on May 1: Akal Takht