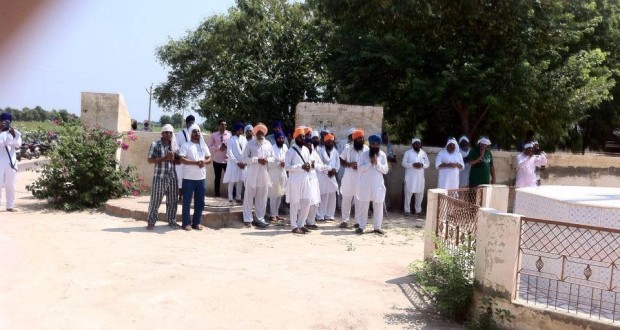 A Saroop of Sri Guru Granth Sahib Ji that went missing from Gurdwara Sant Kartar Sahib in a remote village in Rajasthan’s border district Sriganganagar on 20 August 2014 was today found at the gate of another Gurdwara in Chak 3NN village, Padampur.

Scores of Sikh leaders, led by Gurdwara Baba Deep Singh chief sewadar Tejinderpal Singh Timma, reached the village and confirmed that the Saroop, which had been abandoned by someone with a decorated “palki”, was intact.

A fire had engulfed the complex in Chak 11G village on 20 August 2014. The complex located in a field houses a Gurdwara and “mazaars” of a peer. A Saroop of Sri Guru Granth Sahib Ji was found missing. The furniture and fixtures were damaged and the Saroop and two arrows were found missing. The incident triggered protests. Shiromani Gurdwara Parbandhak Committee president Avtar Singh Makkar and Akal Takht Jathedar Giani Gurbachan Singh had spoken to the district officers over the phone. Later, hundreds of Sikhs organised a protest in Sriganganagar. The caretaker in the Gurdwara had, in the presence of a Akal Takht representative, apologised for maintaining the Gurdwara and “mazaars” in the same complex.