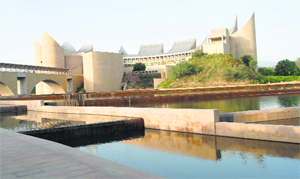 Comments Off on Millions visit Virasat-e-Khalsa in 2 yrs 1,191 Views

Anandpur Sahib, Punjab: With around five million persons visiting it within two-and-a-half year of its opening, the Virasat-e-Khalsa has not only become one of the most popular museums in world, it has also boosted the economy of Anandpur Sahib town.

The income of nearby Takht Sri Kesgarh Sahib has registered an annual increase of Rs 15 crore since the opening of the museum, while shopkeepers and banks in the town have seen a boom in their business. Rents of the shops in the area have increased manifold during the past couple of years and the annual business of banks has crossed over Rs 500-crore mark. The result: Banks such as HDFC, AXIS Bank, UCO Bank and Allahabad Bank have opened their branches here over past couple of years.

Anandpur Sahib Vyapar Mandal president Inderjit Singh Arora said there was no big industry in the area and the major source of income for the local residents was from shops. During the past two years, the shopkeepers have witnessed a sudden boom in their business. The annual rent of the land auctioned by the SGPC to set up vends near Takht Sri Kesgarh Sahib has increased to Rs 3.5 crore from Rs 75 lakh over the past three years, he said.

The Virasat-e-Khalsa, a museum of Punjab culture and history of Sikhism, was opened on November 27, 2011. It stands at the site that is the birthplace of the Khalsa Panth. It was here in 1699, on the day of Baisakhi, that Guru Gobind Singh founded the Khalsa Panth and baptised the “‘Panj Piaras”.

Till now, over 46 lakh persons, comprising around 20 per cent NRIs and foreigners, have visited the Virasat-e-Khalsa. Dr Karamjit Singh Sra, chief executive officer, Anandpur Sahib Foundation, said the museum was built considering that 4,000 persons would visit it everyday and the staff was employed accordingly. However, the number remained nearly its double. On many occasions, around 25,000 visitors reached here on a single day, he said.

Canadian Prime Minister Stephen Harper and ambassadors of many countries have visited it so far. Prince Charles with his wife Camilla Parker came here during its construction in 2006.

This was perhaps the only museum in the world that displayed religious exhibits without asking the visitors to follow any religious norms while entering and that might be one of the reasons behind such a big footfall, Sra said.

It was also an attraction for students of architecture and civil engineering. A 72-minute round of the museum told a whole lot of things about Sikh history to the visitors, he added.

The work on the second part of the museum was going on smoothly and four of the 17 galleries of that part would be opened for the visitors very soon. The first phase displayed Sikh history till the installation of Guru Granth Sahib. The second phase would acquaint visitors about Sikh history from the installation of Guru Granth Sahib to the present day, he added.