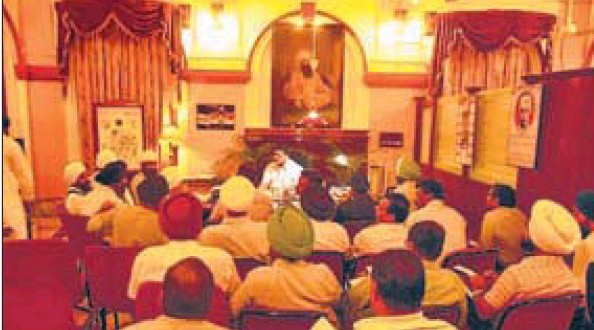 Amritsar, Punjab: The municipal corporation at a special meeting convened on Monday decided to resume the night sanitation project besides regular cleaning of areas surrounding the Golden Temple in the daytime.

The decision came in the backdrop of the local body drawing flak from various quarters, including the Shiromani Gurudwara Prabandhak Committee (SGPC), for its inability to keep the vicinity of the shrine clean.

The project has been entrusted to Baba Kulwant Singh of kaar sewa, Ajnala, who has been carrying out the night sanitation programme with volunteers from nearly 65 villages of Ajnala. Baba Kulwant Singh and representatives of Baba Kashmir Singh (Bhuri wale) kar sewa, who with the support of a US-based family has been overseeing cleanliness of the routes, were also present at the meeting. “The daytime sanitation from 6am to 10pm will be taken up by the corporation,” said Pradeep Sabharwal, municipal commissioner. The meeting also highlighted the need of mechanising the sanitation work for better results.

Divisional tourism officer Balraj Singh, who was also present at the meeting, said, “With the mechanisation of the service, better execution of cleanliness can be ensured.”

In the meantime, Sabharwal stressed on the need of all citizens of Amritsar as well as the visitors to this holy city to take required steps to make civic sense a way of life. He said we all have to take the responsibility of keeping the city clean.

He said Tarundeep Singh, project administrator, Eco-Amritsar; Dr Charanjit Singh, Health officer, municipal corporation, and other planning committee members to work out a plan to carry out a strong awareness drive in the area. It is worth mentioning here that Eco-Amritsar through its parent organisation has earlier been instrumental in making the city of Amritsar an important member of the coveted Green Pilgrimage Network (GPN).

He said the tourism department would be handing over equipment and machinery worth around ` 50 lakh to Ajnala-based Baba Kulwant Singh for the efforts made by his team in the past three years.

The MC commissioner maintained that a follow-up meeting would also be held to discuss the decisions taken during the Monday’s meeting to ensure working of the sewak jathas and the MC in tandem.

“In addition to this, the MC and various NGOs will plan an awareness drive with other stakeholders, where the citizens will be urged to extend their help to the administration in keeping the city clean,” he added.