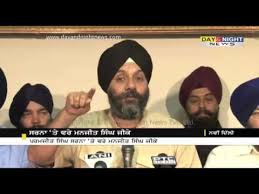 “Sarna has given a very wrong statement against me which has also been published in sections of media. I am holding a very important and responsible position representing the Sikh community. Action should be initiated against him,” said Singh in his complaint.

The Member of State Minority Commission had made allegations that since Singh did not get a BJP ticket for contesting Lok Sabha polls, the Sikh community of Delhi boycotted the meeting of Deputy Chief Minister of Punjab, Sukhbir Singh Badal.