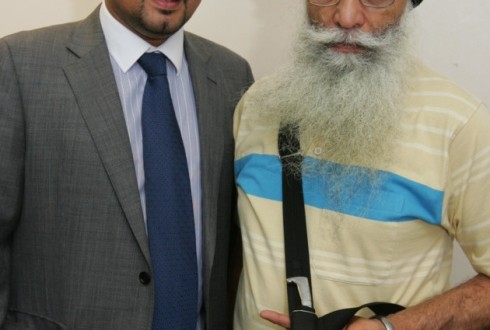 London, UK: A British court has cleared a 60-year-old Sikh man of charges of allegedly attacking a drinker with a kirpan or ceremonial sword. Snaresbrook Crown Court Tuesday found Bagicha Singh not guilty of assaulting Pritpal Singh, 30, with the kirpan, the Ilford Recorder reported Thursday. Both the defendant and the victim are from Ilford in the Greater London region.

The incident happened near Sunnyside Road, Ilford, in November 2012. Singh insisted that he had acted in self-defense.

The prosecutor, however, argued that the elderly man stabbed the victim repeatedly.

The court heard that Pritpal Singh had been drinking in South Park and he became quite aggressive after hitting his leg on a metal pole.

The court also heard that his friends tried controlling him but he said that he would hit the next person he saw.

The group was on Sunnyside Road when Pritpal Singh attacked Bagicha Singh who, in his defense, retaliated, the court heard.

“He (Pritpal Singh) was hitting me on my face and everywhere and trying to snatch my kirpan,” Bagicha Singh was quoted as saying.

He was cleared of one count of wounding with intent to cause grievous bodily harm and another of committing unlawful and malicious wounding.

The Sikh community has praised the verdict, arguing that the case against Singh should have never been filed.

“I’m really pleased with the verdict. If they had found him guilty it would have been a travesty of justice,” Balvinder Saund, a representative of the Sikh Council UK, was quoted as saying.

“He was just a man of 60 minding his own business, talking on the phone as he walked by himself, so the idea of him attacking strapping big lads was just unbelievable. It was almost as if the kirpan was on trial,” she said.