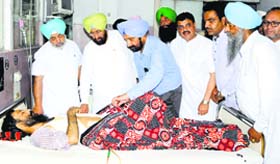 Majithia should be exiled for a year: Bajwa

Comments Off on Majithia should be exiled for a year: Bajwa 617 Views

“Majithia should be exiled from Punjab at least for a year. Only then can the drug mafia nexus in Punjab be broken and the youths saved from the menace,” he said.

Bajwa was speaking to The Tribune at Guru Nanak Dev Hospital here to enquire the well-being of Congress workers injured during an attack allegedly by Akalis supporters in Batala yesterday.

Though all the five Takhts — Akal Takht, Patna Sahib, Keshgarh Sahib, Damdama Sahib and Hazur Sahib — have pronounced ‘tankhah to Majithia, Bajwa claimed “leniency was shown due to the Akali influence in Punjab”.

“That’s why the punishment was not made time-bound… If (Chief Minister Parkash Singh) Badal calls the Akali Dal a Panthic party, he should ensure that Majithia is shunted out of the Cabinet,” he said.

Bajwa claimed the 2017 Assembly polls would prove to be a “game changer”, “and that the electorate would show the ruling Akalis the door”. The injured have been undergoing treatment at local Guru Nanak Dev Hospital here. Bajwa said, “The results of the Lok Sabha elections, which the Congress will win hands down, will only be a precursor of the bigger jolt awaiting the Akalis in 2017. The Badals, Majithias and Kairons will then by party of political history.” About Aam Aadmi Party, he said it was a “directionless force”.

The PPCC chief said he was “bewildered” to see the “dilapidated” medical infrastructure of the government hospital where several Congress workers injured in poll-related violence from Rajasansi, Batala, Gurdaspur and Tarn Taran were admitted.