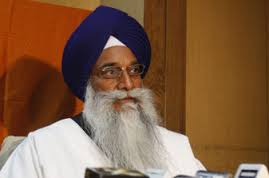 Majithia not summoned on May 1: Akal Takht

Comments Off on Majithia not summoned on May 1: Akal Takht 600 Views

Amritsar, Punjab: Taking a U-turn, Akal Takht jathedar Giani Gurbachan Singh on Tuesday said that revenue minister Bikram Singh Majithia has not been asked to appear before the highest temporal seat of Sikhs on May 1, in connection with the alleged distortion by him of a ‘shabad’ by Guru Gobind Singh.

In a statement issued here on Tuesday, the jathedar also expressed strong displeasure over attempts by certain quarters to politicise the issue.

Denying that Majithia has been summoned to the Takht, the jathedar said the May 1 meeting of the Sikh high priests has been called to discuss the written apology submitted by Majithia over distortion of the shabad ‘Deh Shiva var mohe…’ at an election meeting in Amritsar last week.

“The Akal Takht is supreme and Majithia had come on his own to tender an apology, so there is no question of summoning him before the Takht”, he added.

On Monday, the jathedar, while talking to select journalists, had stated that Majithia will be asked to be present on May 1 when his written apology will be discussed in a meeting of the ‘Singh Sahibs’ at the Akal Takht.

During the May 1 meeting, the jathedars will also discuss the edict issued by Takht Sri Hazoor Sahib declaring Majithia a ‘tankhaiya’ (guilty of religious misconduct) for distorting the ‘shabad’ of the tenth Guru. Majithia has already sought an apology from Takht Sri Hazoor Sahib, situated at Nanded in Maharashtra.

The Nanded Takht has made it clear that while it has accepted the apology of the minister, he will be exonerated only after he performs ‘tankha’ (religious punishment) that is awarded to him by the Takht. For this, Majithia will have to appear in person before the Takht, which he would do so after the elections.

DON”T POLITICISE THE ISSUE, SAYS JATHEDAR
Meanwhile, expressing strong displeasure over attempts by certain quarters to politicise this “sensitive” issue, the jathedar said it is a religious matter and is under the preview and consideration of the Akal Takht.

Previous: Modi avoided visit to Golden Temple: Capt
Next: The First-Ever Sikh Prayer at the Pentagon