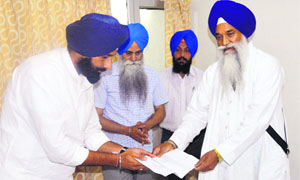 Amritsar, Punjab: A day after tendering public apology for “distorting” gurbani, Majithia on Saturday met Akal Takht Jathedar Giani Gurbachan Singh and handed him over a letter of apology. Sources said the Jathedar received the letter from him and said the matter would be discussed in the next meeting of the Sikh high priests.

Bar him from campaign: Capt

Amarinder said: “The EC must go by its recent decision to bar Amit Shah and Azam Khan from campaigning. Majithia’s crime is no less as he distorted gurbani while canvassing in favour of Arun Jaitley.”

Bathinda: With property tax becoming a major poll issue in urban areas of the state, supporters of the SAD-BJP alliance are distributing copies of a document reportedly signed by Capt Amarinder Singh in December 2006 giving his approval for the tax. The document stated the then Congress Government approved the tax in December 2006 for its implementation by June 2007. It, however, could not implement the same due to impending elections in early 2007.

Previous: US Punjabi woman let off in murder case
Next: Shootout outside US gurdwara