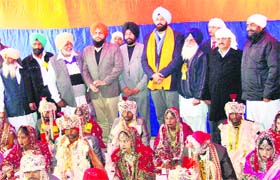 Majitha, Amritsar, Punjab: A mass marriage ceremony was organised today at Majitha village to mark the martyrdom anniversary of Shaheed Baba Jeewan Singh. 51 couples were married as per the Sikh rites in the ceremony.

Extending his best wishes to the newly wedded couples, Cabinet Minister, Punjab, Bikram Singh Majithia, said being human was justified only by being humane. Serving the mankind, especially the destitute was the moral responsibility of every human being, he said.

He lauded the efforts of Shaheed Baba Jeewan Singh Gurudwara Prabandhak Committee and the people of Majitha who contributed in organising the event.

It must be mentioned here that a year ago, 21 girls of economically weaker sections of society were tied into the nuptial bond and the entire amount for the same was collected by the Majitha residents.

“Majitha will emerge as a forerunner in philanthropic causes and will set an example in Punjab. Next year, mass marriage of 101 couples will be arranged,” he said.

Langar for the newly wedded and their families was arranged on the occasion. The couples were also provided with basic necessities to start a new life, which included beds, quilts, mattresses, utensils, almirah and colour TV.

The families of the newly wedded couples expressed their gratitude to the people of Majitha.

Talking to media persons, Majithia said the new list of PPCC had raised many questions on the senior Congress leadership. He added Congress leaders had no concern with common people and they were only fighting for party ranks.

Previous: When Captain America Wears a Turban, What Does He Fight For?
Next: Khalsa’s struggle fruitful: Makkar