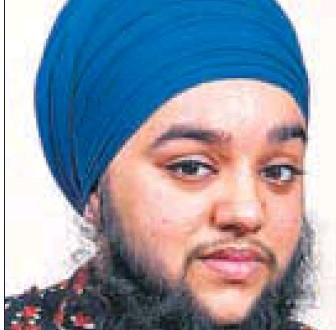 London, UK: Appearing in a photography exhibition celebrating the world’s best facial hair, a British Sikh woman, who has grown a beard for seven years, seeks to convey a public message to love oneself.

Harnaam Kaur, 23, from Berkshire county has been growing a beard since she turned 16 after being diagnosed with polycystic ovary syndrome, a condition that causes excess hair growth, newspaper Daily Mail reported. After being bullied as a teenager, the teaching assistant tried waxing, shaving and bleaching to hide her facial hair; but once baptised a Sikh, a religion which forbids cutting body hair, decided to accept her body as it was.

“When I first started growing my beard, it was for religious reasons,” she said, “but as the years have gone by, I’ve kept it for more personal reasons… It makes me feel like a brave, confident woman who isn’t afraid to break society’s norms.”

Harnaam Kaur is the only woman to appear in the collection of photographs after she spoke against those who criticised her appearance. She is one of 60 people chosen to appear in the exhibition, Project 60, which marks the launch of Beard Season, a non-profit organisation that seeks to raise awareness of skin cancer by urging people to grow facial hair through winter.

“It’s incredible to be the only bearded woman among all these men. It makes me feel really strong,” Harnaam Kaur said. “And, raising awareness for such a good cause is like a cherry on the top.”

Photographer Brock Elbank said: “We’ve had a lot of interest from some truly amazing people and Harnaam Kaur is one of them. To have her on board is an exciting prospect. I like the fact that she has embraced having a beard and she’s very striking with it.”

Her portrait, as well as the pictures of the 59 others, will be displayed in London later this year.