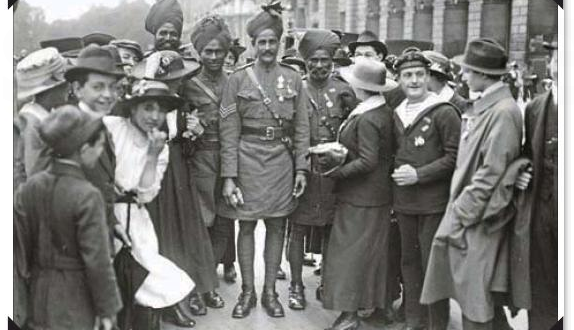 Life goes on as if nothing happened, but we must never forget

Comments Off on Life goes on as if nothing happened, but we must never forget 415 Views

How did people respond to seeing the foreign troops arrive?
For the rural residents, most of whom had not been as far as Paris, seeing the Indians arrive was initially a surprise, even tinged with suspicion and distrust. But then it quickly changed to compassion and pity for the men who suffered so much during the winter of 1914.

The Indians were not allowed to mix with the locals, and language must have been a huge barrier. What kind of stories did you hear about them, growing up?
When I was young, I heard many stories from people who said they had met the Indian-Sikh soldiers. One gentleman told me how his father saw a soldier limping because his shoe had nails protruding into it, so he asked him to take them off, fixed the shoes and the soldier thanked him and walked on.

Another was just nine years old then and grew up on a farm in Saint-Floris; his father was a prisoner of war in Germany. He told me how he used to see Indian soldiers in the pasture behind the farmhouse. He remembers a French woman pouring milk into an Indian soldier’s copper pot to feed the hungry soldiers.

And sometimes fear too, perhaps?
Yes. In fact, when the Gurkhas were stationed near the same farmhouse, they slaughtered a sheep with their khukris one day. The noise drew the children. The story went that the British commanders scared the kids off by saying the Indian soldiers were dangerous. The frightened children left as the Gurkhas laughed.

Today there are hardly any visible traces of this period left in the area, except for a few cemeteries and memorials…
Crops now grow where old trenches were dug. Houses have been built were soldiers walked and artillery fire fell. Life goes on as if nothing ever happened. But we must remember that the region of Neuve Chapelle was hell for Indian-Sikh soldiers. They lived for one year in appalling conditions.

The soldiers occupied trenches that were often flooded. Rotting beetroot in the fields gave off a stench. It was absolutely freezing in winter. The hospital here, at SaintVenant, became the evacuation centre for the Lucknow Division and Meerut Division in 1915. They treated all kinds of diseases — typhoid, meningitis, tetanus, syphilis, influenza, infections, injuries and frozen limbs. At the Battle of Neuve-Chapelle and Battle of Aubers, both in 1915, the number of injured in transit amounted to more than 400 men per day.