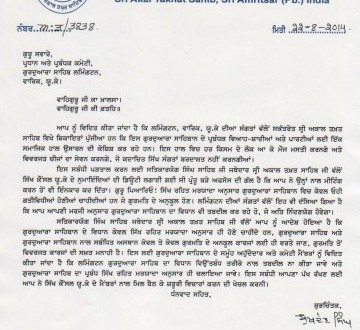 Comments Off on Letter From Akal Takhat Sahib To Gurdwara Sahib Leamington And Warwick, UK 1,651 Views

Warwich, UK: The following correspondence has been sent by the local sangat of Leamington. This letter was originally addressed to Sikh Council UK, which is the official organization nominated by the Akal Takht Sahib to ensure proper standards are being met by Gurdwaras and other Sikh institutions in UK.

A letter conveying the Adesh by Jathedar, Sri Akal Takht Sahib, that the constitution of the Gurdwara should accord with Sikh Reht Maryada and the proposed changes should not be made in any circumstances. The letter requires the Gurdwara management to meet with representatives of the Sikh Council UK. On August 23, attempts were made by representatives of Sikh Council UK to hand deliver the Adesh/letter unfortunately the Pardhan of the Gurdwara Sahib refused to take it in hand and indicated that the letter ‘should be left in the Gurdwara Sahib Letter box and considered as being received’.