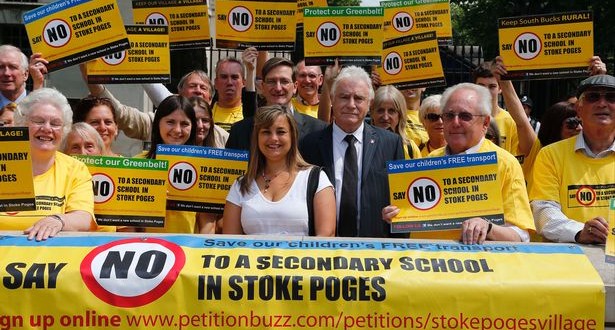 Khalsa Secondary School, in Hollybush Hill, Stoke Poges, has been based at Pioneer House since last September.

An application to make this permanent was turned down by South Bucks District Council (SBDC) in January.

The Department for Education (DfE) appealed against that decision, but this was rejected in May.

Over two days the inspector will hear from the parish council, consultants and Khalsa Secondary School, with the Slough Sikh Trust, a residents’ association and members of the public also getting the chance to speak.

The inspector will consider the appeal by DfE for a permanent secondary school at Pioneer House.

The inspector’s report will then go to the Secretary of State, who will make the final decision.

Campaigners have called this their ‘last chance’ to make the strength of feeling known regarding the application.

They said there are concerns over traffic, transport, noise and protection of the green belt, as well as questioning what area the school caters for.

Vice-chairman of the parish council Saera Carter said: “We are as prepared as we can be.

“It was hard to get hold of the documents that we needed but we are confident that we have done as good a job as we can do under the circumstances.”

A marquee will be put up to allow more people to attend the meeting.

She added: “The inspector has said she understands there is a great deal of interest in this and that there needs to be space for all who want to attend.”

Chairman of the Slough Sikh Trust Nick Kandola said: “The Khalsa Secondary Academy, in Stoke Poges, is now the home of 100 students, with another 120 expected this September.

“The site was chosen because it is an ideal site for a school and represented value for money.

“The recent decision by Bucks County Council to remove any objections on the basis of traffic demonstrates that traffic is not, nor was, a major issue.

“We remain confident and hopeful that the recent political decision by the planning committee will be overturned at this week’s appeal hearing.”

The hearing is being held at SBDC offices, in Oxford Road, Denham, from Thursday, July 10 to Friday, July 11.