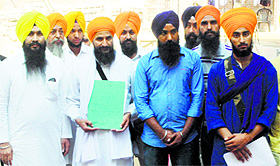 Accompanied by his supporters, Khalsa appealed to the Jathedar to expedite the proceedings for the release of the Sikh detainees who had completed their jail term.

He said he was answerable to the Sikh community over the culmination of his protest. “I am a dedicated Sikh and was bound to honour the edict of Akal Takht. It was only after an assurance from Giani Gurbachan Singh on getting Sikh detainees released that I had ended my fast. But he has so far not kept his promise. I have handed over a list of Sikh prisoners to the Jathedar,” he said.

The Jathedar assured him that steps were being initiated for the release of Sikh prisoners. “I will take up the matter with Chief Minister Parkash Singh Badal to avoid further delay,” Giani Gurbachan Singh said.

Khalsa appealed to the Sikh youth to support their call for Punjab bandh on November 1.