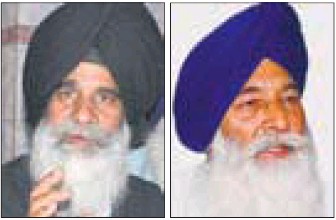 Spearheading the movement for an independent panel to manage gurdwaras of Haryana, Jhinda and Nalwi were punished for their alleged anti-panthic stance.

In a ‘hukamnama’ announced on July 16 at Amritsar, Jathedar Giani Gurbachan Singh had also announced excommunication of Haryana’s finance minister and veteran Congress leader HS Chattha for his alleged role in the bifurcation of Shiromani Gurdwara Parbandhak Committee (SGPC).

The ‘hukamnana’ called upon Sikhs to boycott the three leaders ‘socially, religiously and politically till the time they seek forgiveness at the Akal Takht’.

It warned that any Sikh found guilty of violating this directive would be dealt by the Takht in accordance with the ‘maryada’ or the religious tradition of the community.


However, none of the three have appeared before the Takht and continue to enjoy support of Sikhs in their social and political activities. Both Jhinda and Nalwi find their names on the top two slots of the 41-member ad hoc HSGMC announced by the Bhupinder Singh Hooda government on Tuesday evening.

The panel would soon elect a 11-member body of executive within the ad hoc committee. An elected 40-member body would follow, and there would be no nominee of the government.

Jhinda and Nalwi confirmed to HT on Thursday that they were ready to accept any role in the HSGMC as their excommunication had nothing to do with leading the religious body.

Jhinda said that the issue of his excommunication would be decided by Sikh sangat of Haryana at the Panthic Ikhat scheduled for July 28 in Karnal. “I will follow the decision of Sikh sangat,” he said. Nalwi hoped that excommunication from panth would be solved amicably in the days to come. “In fact it is no longer a major issue but I admit that it would continue to haunt me till the matter is sorted out,” said Nalwi.

However, both clarified that they personally held highest regard for the Akal Takht.