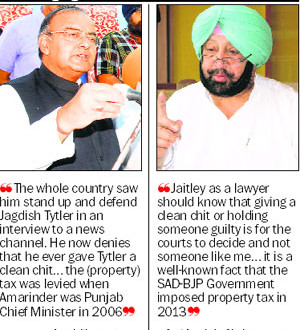 In his latest blog, Jaitley said: “The politics of Captain Amarinder Singh only reflects his feudal instincts. He still lives in a world of sycophants where he is referred to as “Maharaja Sahib”. He is discourteous and rude.”

Jaitley said the whole country saw him stand up and defend Jagdish Tytler in the 1984 genocide case in an interview to a news channel. “He today denies that he ever gave Tytler a clean chit.”

On property tax, Jaitley said Amarinder was “caught being untruthful” on the issue. He claimed that the tax was levied when Amarinder was Punjab Chief Minister in 2006.

On the other hand, Amarinder said Jaitley was “repeatedly resorting to half truths like a third rate liar” in the hope that it might be taken as truth. He said whether it was the issue of property tax or the statement about Tytler, a “desperate and frustrated Jaitley was trying to distort and twist facts as he had nothing else to speak on”.

Captain also lashed out at the language Jaitley has been using against him in his blog. “Jaitley’s mask of decency is wearing off and he has started betraying his frustration and arrogance,” he said while referring to today’s blog.

He said, “I leave it for the people to read it and judge who is bringing down the level of the discourse and who is rude and discourteous.”

as his rallies were either not drawing any response or were being cancelled, adding so much so he had to get filmstars to draw the crowds. “His frustration is understandable. To understand is to forgive and I forgive him all his indiscretions as any person in his situation may have to do the same,” he said.

On Tytler issue, Amarinder said: “Jaitley as a lawyer should know that giving a clean chit or holding someone guilty is for the courts to decide and not someone like me.” Similarly, Amarinder claimed that it was a well-known fact that the SAD-BJP Government imposed property tax in 2013.