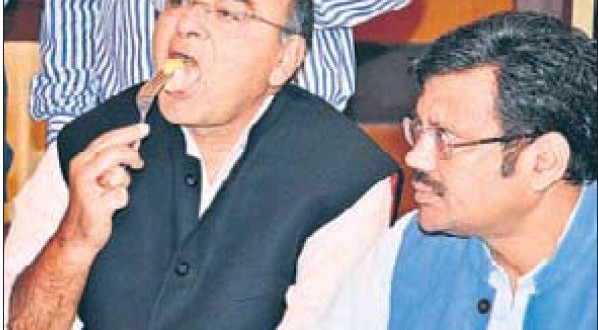 Amritsar, Punjab: With the Shiromani Akali Dal ( SAD) as its poll partner, the BJP is adopting a cautious path on all sensitive Sikh religious issues during its poll campaign. Another such instance came when the BJP’s Amritsar candidate and senior leader Arun Jaitley was asked about his stand on the Operation Bluestar Memorial constructed in April last year in the Golden Temple complex by the Shiromani Gurdwara Parbandhak Committee (SGPC) which is controlled by the SAD.

“Our stand is absolutely clear in the BJP. So I don’t have to repeat it. What the stand of our state unit was, that is our stand,” Jaitley stressed, evading a direct reply. The state BJP unit had opposed the construction of the Bluestar Memorial at the Golden Temple complex — built in memory of those killed in army action of 1984 to clear the complex of militants. The state BJP had even said that the memorial was not in the interest of communal harmony and peace.

Jaitley, however, credited the SAD-BJP coalition for peace and stability in Punjab. When the media asked Punjab BJP chief Kamal Sharma about the party’s stand, he said, “I think you all have a strong memory. Issues are being made out of non-issues.”

Even SAD leader and state cabinet minister Bikram Singh Majithia intervened to say that everything was “on record” and could be checked.

Questioned about honours being bestowed on Sikh Freedom fighters, Jaitley said, “We are against any kind of honour to terror. But I will not comment on the cases that are in court.”

Later in an interview to The Tribune, Jaitley said: “I have always been critical of the Operation Bluestar. I think it was a poorly planned without taking into account the long-term consequences on the Sikh community and the country.” On Bluestar Memorial, he said: “My party will never support any action by which any insurgent or terrorist becomes a part of any respectable memoir or history.” On the Anandpur Sahib resolution, he said it was quite possible that on some issues the BJP and tghe SAD did not see eye to eye.