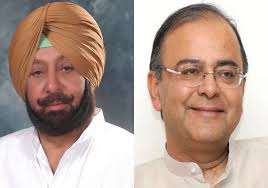 Comments Off on Jaitley dubs Amarinder ‘monarch in democracy’ 561 Views

Amritsar, Punjab: BJP candidate Arun Jaitley today launched a scathing attack on his Congress rival Capt Amarinder Singh, terming him “a monarch in a democracy”, while accusing him of “not speaking a word on what he did for Punjab” during his stint as the CM.

In his latest Facebook post, Jaitley said, “Captain creates fake propaganda and then buys the same himself. He relishes his persona of a monarch in a democracy. Captain’s credentials are not exactly inspirational. The standards he has set in his own life are not an object of envy. Moreover, he has a feudal attitude of being rude, impolite and talking down to people.”

He alleged that Captain had no vision on development of Amritsar. “His track record of accessibility is poor. It is only when he has to file his nomination papers that he realises that it is good to be a family man. He lowers the level of political discourse. But eventually democracy has its own way. It will never accept a discredited Captain of a sinking ship,” he concluded.

Meanwhile, Capt Amarinder “shredded the facade of decency and level of debate claimed to be maintained” by Jaitley in his campaign diary. He said, “Desperation and frustration appear to have gotten the better of Jaitley and now he has betrayed his actual mentality and mindset. As far as what I have done for Punjab, I need no certificate from an alien like you and I think your patrons must have already told you as I feel it below my dignity to trumpet what I did for Punjab.”

He said if Jaitley had pronounced the Congress to be guilty of 1984 genocide, he must also pronounce LK Advani and CM Badal guilty who either pressured or approved of the decision to send the Army into Darbar Sahib.

Amritsar: BJP’s candidate Arun Jaitley from the constituency on Saturday assured the people of providing a package for the border areas and giving heritage status to the holy city at a rally in Lopoke village. Jaitley called Capt Amarinder a “reluctant candidate” and said the Congress was fighting a lost battle. Chief Minister Parkash Singh Badal, who was also present at the rally, called Capt Amarinder a liar and accused the Congress of hatching the Blue Star conspiracy. He said the 1984 anti-Sikh genocide were planned as rioters were given the house numbers and names of the Sikh residents in New Delhi. Badal said the fear of losing the election had forced the Congress not to announce Rahul Gandhi as its prime ministerial candidate. “The people always want to know who will be their leader,” he said. Badal claimed the NDA would easily win 272 seats to constitute the next government. Former Transport Minister from Congress Parminder Singh Sandhu and Jathedar Mohan Singh Matia, who had earlier left the SAD, joined the party today.